Victorian Sterling Silver Lidded Tankard c1865
A very good Antique Victorian English Sterling Silver Presentation Lidded Tankard by Daniel & Charles Houle, London and dating from c1865. The tankard is hallmarked on the underside of the base with the maker's mark "DH/CH" for Daniel & Charles Houle, the Lion Passant Sterling Silver Mark, the Monarch's Head (Queen Victoria) duty mark, the Leopard's Head London town mark and date letter "k" for 1865/66. Also hallmarked on the inside of the lid. The lid with a later engraved presentation inscription, having been won at the Wilton Sheep Fair : "Wilton Fair 1896, Presented by the Earl of Pembroke, for the best 100 Wether Lambs won by George Blake" This is a very good example and in excellent condition. It measures 5 1/2" inches (135mm) in height. The base just under 4 1/2" inches (112mm) in diameter. The weight is 435.1g/15.35oz/13.99ozt. 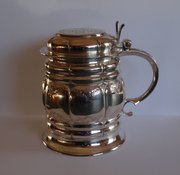 English Silver Compact, Garrard & Co
A very good quality English Sterling Silver Compact made by Garrard & Co. The House of Garrard is the longest serving jewellery house in the world, established in 1735. Crown Jewellers to the British Royal Family. The box is hallmarked on the inside, with the maker's mark "G&CoLd" for Garrard & Company Limited, the Lion Passant Silver Mark, the anchor Birmingham town mark and date letter "G" for 1956/57. It has engine turned engraving to all sides, the lid with a gold thumb piece at the front. An item of excellent quality and in very good condition. It measures 65mm x 65mm x 10mm. The weight is 100.2g/3.53oz/3.21ozt.

Victorian English Silver Cigar Case c1860
An impressive, antique Victorian large English sterling silver box. Most probably originally intended as a cigar or cheroot case, however could be put to several different uses. The box is hallmarked on the inside lip with the Monarch's Head duty mark (Queen Victoria), the maker's mark "TJ" for Thomas Johnson, the Lion Passant sterling silver mark, the Leopard's Head London town mark and date letter "e" for 1860/61. The inside of the lid also having the maker's mark "TL", the Lion Passant, alongside the date letter "e". The inside of the lid also stamped with the original retailers name "H Rodrigues, 42 Piccadilly" for Henry Rodrigues, 42 Piccadilly, London. The lid and base both deorated with similar engraving. The box is in excellent condition. It measures aproximately 140mm x 70mm x 30mm. The weight is 210.4g/7.42ox6.76ozt

English Silver Pint Mug, Barnard & Sons, London
A good, George V, English Sterling Silver Pint Mug made by Edward Barnard & Sons of Hatton Garden, London and dating from c1921. The plain silver mug is free of engravings therefore would be ideal for a presentation piece or for a trophy. It is hallmarked with the maker's mark "EB&SLd" for Edward Barnard & Sons, the Lion Passant sterling silver mark, the Leopard's Head London town mark and date letter "f" for 1921/22. The base stamped with the name of the original retailer "Ollivant & Botsford, Manchester". It measures 4 1/2" inches (115mm) in height and 3 3/4" inches (93mm) in diameter. The weight is 419.3g/14.79oz/13.48ozt. It is in excellent condition. 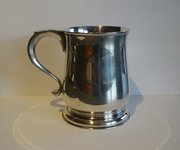 George III, English Silver Snuff Box c1804
A good George III, English Sterling Silver Snuff Box made in London and dating from 1804. The inside of the box hallmarked with the maker's mark (slightly worn), the Lion Passant sterling silver mark, the Leopard's Head Crowned london town mark, the date letter "I" for 1804 and the Monarch's Head duty mark. The box with nice engraving to all sides. The lid with engraved initials. The box is in good condition, but does have some minor indents. It measures 62mm x 42mm x 12mm. The weight is 38.2g

George III, English Sterling Silver Novelty Salts
A very nice pair of Antique, George III, English Sterling Silver Novelty Salts in the form of a bath tub, made by Richard Cook in London and dating from c1805. They are hallmarked with the maker's mark "RC" for Richard Cook, the Monarch's Head duty mark, the Lion Passant sterling silver mark, the Crowned Leopard's Head London town mark and date letter "K" for 1805/06. They have an armorial crest engraved to the front (see photo). They measure approximately 3 3/4" inches (93mm) in width. The weight (both combined) is 213.4g/7.52oz6.86ozt In very good overall condition.